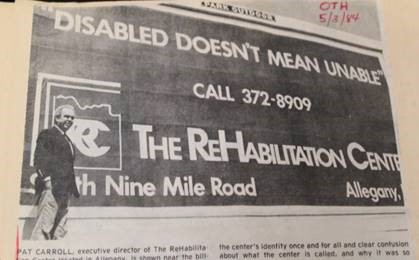 The Intandem family suffered a profound loss recently with the passing of Patrick Carroll, the agency’s first executive director.

Mr. Carroll served as Executive Director of the ReHabilitation Center for thirty years, from 1970 until his retirement in 2000. During that time, he oversaw the agency’s dynamic expansion from a staff of about 12 people and a $200,000 annual budget to a 400-person workforce with an $11 Million budget. In building the company, he set the stage for his successors to create one of the leading human-services organizations in Western New York.

In many ways, Pat’s career paralleled the growth of the agency. In 1958, as he was graduating from St. Bernard’s High School in nearby Bradford, PA, a small group of parents in Olean was forming the first iteration of the ReHabilitation Center. In reflecting on that time, Pat offered these thoughts:

“I was 18 years old and was going to graduate from high school in a couple of weeks. I had an empty feeling because I didn’t know what I wanted to do with my life.  All I knew was that I wanted to work with people. What is ironic is that while I stood on a Bradford street corner in 1958 feeling unsure about my future, a group of concerned parents in Olean had just organized what would eventually become The ReHabilitation Center.  We were only 20 miles apart, yet we might as well have been worlds apart. I was not aware of their existence, nor they of mine.  Neither of us knew that in 10 short years our paths would cross.”

And cross they certainly did. After high school, Pat earned a bachelor’s degree from Gannon University and a master’s degree from Fordham University. He worked for a time in the New York City area. Eventually, he moved closer to home, taking a mental health counselor position at an Olean mental health clinic.  While there, he was invited to be a guest speaker to that group of parents and community leaders forming The ReHabilitation Center.  As they say, the rest is history.

Pat oversaw the expansion of programs and services at The ReHabilitation Center, including SubCon Industries (now Intandem Solutions), the day-services building in Allegany, the Carroll Clinic, the ReHabilitation Foundation, and many residential facilities.  His resume includes countless leadership positions and affiliations on the national, state, and local levels over his career, and he was honored for his contributions to the community and profession with many awards. In 1991, he was only the second local leader (after Cutco’s Erick Laine) to receive the Greater Olean Area Chamber of Commerce LOUIE Award for entrepreneurial leadership and dedication to the community.

Born on St. Patrick’s Day, Pat was known for his love of all things Irish, dressing up in Irish garb for the holiday, passing out treats, and bringing smiles to the faces of employees and the individuals supported by the agency. He also was a collector of clown figurines, with over 100 adorning his office. His comfortable style and sense of humor endeared him to many people, but it was his passion for supporting people with disabilities that made him and the agency such a success.

Pat Carroll’s  leadership philosophy was one of respect, inclusiveness, and compassion, and he lived those values every day.  He often attributed his success to the people around him, whom he characterized as bright, caring, and visionary.  At the time of his retirement in 2000, he was asked the traditional question of how he wanted to be remembered.  His response:  “I’ve worked too long to worry about what people say about me.  I’m just as honest and upfront as I can be.  My desk is like everybody else’s.  My pencils have erasers on them. I make mistakes like everybody else, but you just can’t worry about it.”

Mari Howard, Intandem’s current President and CEO, remembers fondly her early years with the agency under Pat’s leadership: “He was a true servant leader, a calming presence during difficult times, and an inspiration to all of us who worked for him.  The agency faced considerable challenges during the time that he was at the helm, but we always knew we would find solutions.  He created a climate of mutual respect and trust, and I carry many valuable leadership lessons from him to this day. My heart goes out to his wife Gloria and his family. He will be deeply missed.”

There is no question that Pat Carroll put into place the people, resources, and progressive thinking that created what is now the Intandem brand.  It was his life’s work, and the agency stands today as a tribute to his vision.  But his true legacy is his family, who always came first in his life. He and his wife, Gloria, had four children whom he adored, and an extended family that cared for him deeply.

The entire Intandem agency extends its condolences to Gloria Carroll, the Carroll children, and all who loved Pat. We invite those who knew Pat to take a moment to reflect on his life and their memories of interactions with him; and we invite the community to pause for a moment of gratitude for a man who gave so much to our area for those who often are unable to tell their own stories.